I ran across two little bitmap related issues in Flash during my last project (should be live by end or March) that I’d thought I share.

The first issue is regarding layers of transparency. Sometimes in a sprite I’ll have multiple shapes layered on top of each other, or various layers of shapes drawn. Now if you change the alpha of that sprite, it will affect all the objects it contains. So, for example, if in my sprite I have one sprite with contains a red rectangle, and on top of it there is another sprite with a blue circle, if I change the alpha of the container sprite, you’ll be able to see though the blue circle since it’s alpha is also being changed. If I want the whole thing to fade together, so I don’t see though the individual parts, I’m out of luck.

So I figured I could use cacheAsBitmap to essentially flatten the sprite, so when the alpha is applied it would be applying it to an image. However, this doesn’t work. Obviously, I could just do it manually and draw the contents to bitmapdata, and swap it out whenever I need to do a fade. I’d like to avoid that as much as possible, so I figured I would try a last ditch attempt – using a empty filter. Basically, if I put a blur filter (or any other) on the container sprite that I am applying the alpha change it, Flash will automatically cache it as a bitmap. Logically, this should be no different than just setting the cacheAsBitmap property to true, as I had done before and failed. However, this works. I don’t know why, but somehow setting a filter to the sprite forces it to cache differently then just using the property. Below is an example (The bars at the top are to show a side to side comparison of each color for each object. It shows that the alpha affects the colors the same way for all of them, since it appears as an optical illusion that the one on the right is different)

The other thing I’ve run into before, and I’m sure countless others have to, is applying a filter to an object which you have drawn something round in. What happens is that the right-most one or two pixels of the image get cut off.  It looks like Flash is converting the object to a bitmap (which we know it does), but is not taking anti-aliasing into account when setting up the bitmapdata width and height. The solution I used to get arround this issue is when drawing my shape I add a 2px transparent line around it. You won’t see the line, and since it’s a stroke it shouldn’t affect the active mouse area if the target is a button. If you’re drawing a shape  that already has a stroke around it, you’ll either need to draw it twice or do something to give the are just that little extra bit of padding on the edges. Here’s an image to help illustrate what I’m rambeling on about: 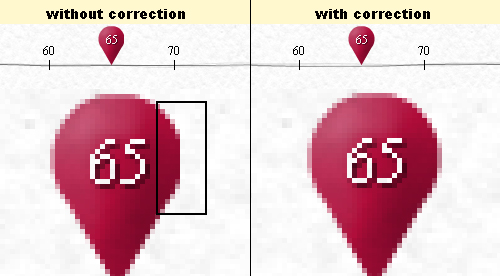 One thought on “Bitmap Filter Adventures”