So I just finished my first project at Firstborn Multimedia – XM Wild Ride and is more of a game than a traditional site. The user is driving along in their new XM radio enabled car and you’ll drive though four cities based off of the many different genres XM satellite radio offers. During open road areas in between cities you can take exits to two minigames and a theater section, which unfortuanly only has one video as of now. The site uses the same engine that was used for the Zune Journey that Firstborn did last year.

My role on the project was development. I programed the ‘Help the Hippo’ game which is basically Frogger with a hippo. I also did the main drive experience, which involved taking the preexisting Zune scroller engine Mathieu created and repurposing and almost completely overhauling it.  This was the first thing I was assigned to pretty much from day one. I started by doing the game, but after finishing up the alpha pretty quickly I was switched to doing the drive. All the enviroment illustrations were provided to us but I arranged them for the enviroments. Mathieu Badimon was the lead developer and oversaw the entire development, as well as programmed the site shell and structure. Izaias Cavalcanti did the ‘Flip the Animals’ game and Max Holdaway did the theater section. Joon Park modeled the characters and fellow RIT New Media Designers Mike Kuzmich and Eric Eng did the animations. Will Russell and Wes Adams were the producers for the project. We also had some help with the animations and touch up work by some of our interns.

By the way, we hid a bunch of Easter eggs, which are invisible targets on select buildings. Here’s an example freebie – if you click mouth of the guy on the first bus stop, you’ll get a mini-map showing the position of the other cars that I used for debugging. (Also, while developing the project I discovered the site syncs well with the new album from The Dandy Warhols, specifically Love Song and Mis Amigos.) 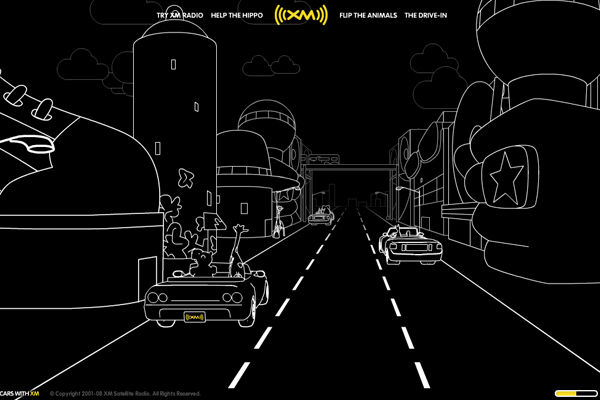