So since Mathieu Badimon, creator of FIVe3D, sits right behind me at work and we’ve been working on a project together, I figured I should give his 3D engine a try. In case you aren’t familiar with it, FIVe3D is a light, simple, 3D emulator for Flash. However, don’t confuse it with PaperVision. If you want full modled polygons with textures, lighting, shadows – basically full 3D, then that is where PaperVision is your tool. But if you need simple 3D rendering, and you don’t want to import a million classes and compromise performance, then that’s where FIVe3D comes in to play. Mathieu does a pretty good job at showing off it’s uses on his LAB site.

So back to what I’ve been up to. I’ve always been interested in doing niffty 3D stuff with Flash, so getting into this was right up my ally. One of the first things I did was extend the engine to render stereographically, as where you would be wearing those old time 3D glasses with the two different color lenses. With the FIVe3D classes, I’ve extended the Scene3D class, so instead of Scene3D you use AnaglyphScene3D and it will display the result for use with 3D glasses. So anything done with FIVe3D can be dropped into it and it should work perfectly. It’s set up so the user can change the offset of the two perspectives, as well as show the original rendering. I still have to tweak the way it applies all three together as right now it blows out the original image’s colors. Keep in mind too that in order to get the stereographic effect, you need to render the scene twice, so if you’re showing the original image as well then you’re rendering 3 times, and that can make the performance take quite a hit.

Anyways, here are two examples of what I’ve done with it. This first test just shows a bunch of cubes in space, but it runs pretty smoothly, even on my old G4 PowerBook. This next test can be pretty heavy, so be prepared for a browser crash if your computer is weak of heart. This depth demo takes a grayscale image and converts it into points with a z-depth based off of the brightness value. I’ll do some more with it, and will probably post some more test within the next few weeks. 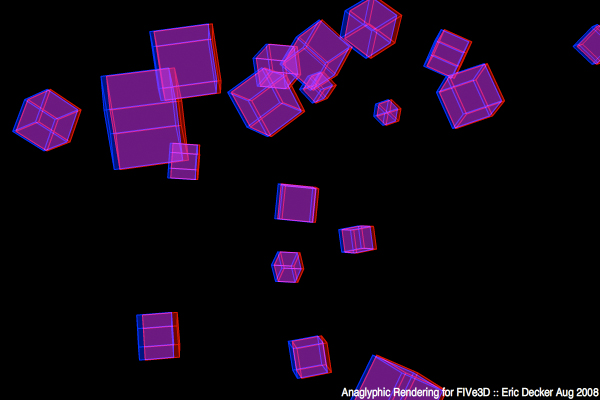 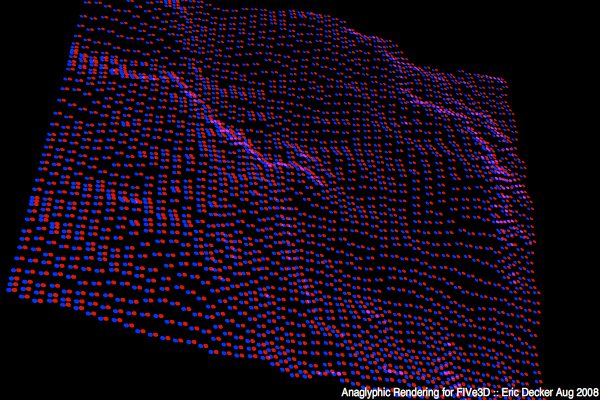 One thought on “Anaglyphic 3D Rendering in FIVe3D”